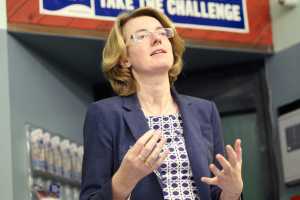 Both the Leader and Chief Executive of Bradford Council have been forced to issue a joint apology over images used in media marketing for their ‘#TogetherBradfordCan’ campaign.

The scheme was launched last week with a view to profiling business resilience during the COVID-19 crisis. Those images used however, are all of white people, angering the BAME business community for not highlighting the diverse background of the city.

The death of George Floyd in America, suffocated after a police officer had forcibly pressed and held a knee on his neck, has angered critics even more, given the fall-out from those subsequent demonstrations around the world.

In addition, thousands of pounds have been donated by the Asian community to help with the COVID-19 pandemic in Bradford – many believe the way this campaign has been marketed has added fuel to the racial fire at a particularly sensitive time.

The Editor of Asian Sunday, Fatima Patel, – a fervent campaigner for racial equality in Bradford has said: “I am very disappointed at the way Bradford Council have delivered this campaign. The irony is in the hashtag #Together. The image does not represent #Together to me and I am gravely concerned about the impact this is going to have on on our diverse communities and our very impressionable young people.

“We are a city with the largest young population and campaigns like these are damaging when handled wrongly. It’s welcoming to see an immediate apology, however a further assessment within the council needs to take place to continue reassuring all of Bradford’s amazing communities that our local government is representative of everyone and totally committed to diversity, equality and social justice.”

The controversy has gone viral with one message on social media saying: “This is quite worrying. Are they pandering to outside investors on the basis that there are no ethnics? This does not reflect well on those that represent the Asian contingents on the Council. They should bury their heads in shame. I won’t hold my breath.”

Mohammed A Rauf, MBE, tweeted: “Great city, Great people, but please have another look at the poster Bradford Council and think what’s missing – clue represents about 36 per cent of the population. No doubt an oversight or an ignorant mistake.”

Another said: “Nothing new here………..it just gets more sophisticated and sinister.”

Labour Cllr Mohammed Amran, who is also Chair of Bradford West added: “I’m extremely disappointed and ashamed of Bradford Council. I was elected by the diverse communities of Bradford and proudly represent them all, but this poster doesn’t represent or reflect our Bradford communities and our Council staff. I am asking senior management to tell me where is BAME representation? They should take responsibility for this campaign.”

Cllr Susan Hinchcliffe, Leader of Bradford Council, and Chief Executive Kersten England said in a joint statement: “We would like to make a full apology for any distress caused to members of our community following two pieces of communication which were sent out last night to promote a community and a business initiative. We acknowledge that the images did not properly represent the full rich ethnic diversity of communities within our great district and we have instructed that they are not used again.

“While we are working with communities and businesses from all corners of Bradford District to raise awareness of the incredible work, innovation and resilience being shown by people across the district, we understand that these images were misleading and both have been removed immediately.

“We take equality and diversity incredibly seriously, which is why this is so disappointing. We will use this as an opportunity to reflect as an organisation on how we are ensuring we live out our commitment to equality and diversity. The priority has to be that we plan for a better future for everyone in the district.”

The question has to be – have community relations been damaged, given all the hard work done by the BAME community themselves?

In reacting to the apology Cllr Amran told me: “Of course we welcome this apology, but it won’t count unless firm action is taken.”

Has ‘woke culture’ gone too far with the Mini Gems rebrand? People from Keighley react