Home Regional News Kirklees Health chief gets out on the streets to encourage take-up of Covid... 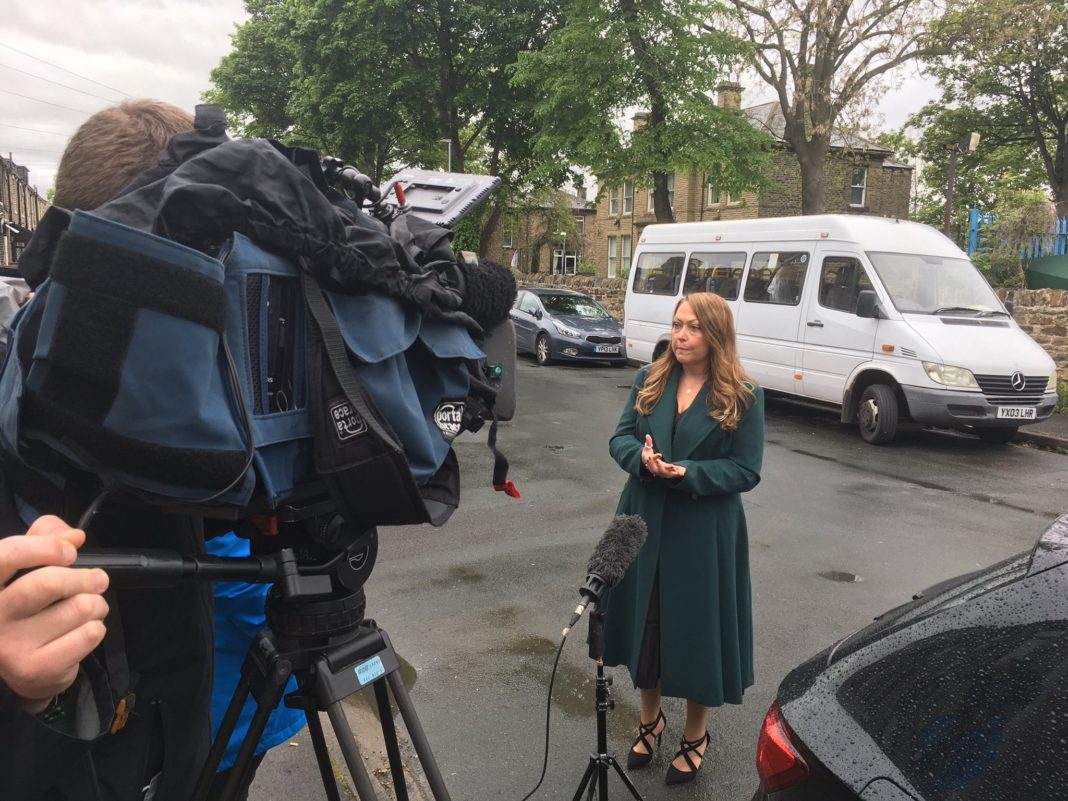 Kirklees’ health chief has joined Covid response teams out on the doorstep as the council ramps up its campaign for people to be tested for the coronavirus.

Rachel Spencer-Henshall, director of public health at Kirklees Council, said face-to-face encouragement – albeit masked – was vital if the authority was to tackle the Indian variant and for infection rates to come down.

She said it was “disheartening” that infection rates “are not what we would want them to be” but that vaccination was “the route out” of the current situation.

She said testing was “hugely important”, but that they were working on improving vaccine take-up in the borough.

“For the hesitant, just a conversation that can give some reassurance from a professional can make the difference between them not having it and having it.

“Investing time to do that is vastly important and hopefully creating a sense that we are bringing the community with us.

“If we can get everybody vaccinated so that we can create a situation where people aren’t getting seriously ill or dying, then hopefully it will become a situation that is much more manageable while society continues as normal.

“People are trying to do the right thing. We know our communities and we know the public mood. It’s knowing what messages to give that help people to feel like they can play their part.”

Rolling out surge testing at the Taleem Training and Community Centre in Savile Town in Dewsbury meant having teams on the ground to knock on residents’ doors to ask that anyone over the age of 11 takes a PCR Covid-19 test.

Ms Spencer-Henshall even gave advice to a passer-by who stopped his car to ask for further information on testing and vaccines.

Kirklees has the fourth-highest Covid infection rate in England with the surge of cases believed to be as a result of the Indian variant.

The borough is considered to be a “coronavirus hotspot”.

Savile Town and Thornhill Lees has the highest rate of cases in the borough according to data from the seven days to May 13.

She said that would require government intervention.

She added: “From an administrative boundary perspective we are Kirklees Council and we will respond at a Kirklees level but also make sure that we are responding in the areas that we need to go to most.

“In terms of our ability to respond to Covid within our communities, we would always take an intelligence-led approach, which is why we are door-knocking here [in Dewsbury] and we have a mobile testing unit going into Honley because we have seen an increase in cases there.

“It might change next week. If we start to see a spike bubbling in other bits of Kirklees we will go and respond there.

“I feel completely comfortable that we are taking an intelligence-led approach – and our map that we publish every week shows exactly where our cases are. It’s not something that we are trying to hide.”

Among those backing the Kirklees team was local man Kaushar Tai, who said some people who had been reluctant to take the vaccine had been encouraged to do so via intervention from Muslim scholars as well as other faith and community leaders.

He said a mix of uncertainty and a misunderstanding of what the vaccine was that prevented take-up.

“Initially, that was the case, but now they have got connections with India.

“In this area we have got people who are from India, Pakistan and Bangladesh. They have seen what’s happening there. People are yearning to take the vaccine there because they are dying in large numbers.

“That’s why we need to take heed here [in Dewsbury]. It’s a blessing that we’re living in this country and we’re able to take the vaccine free of charge. The irony is that we’re hesitant.

“To those that are still hesitant we have a responsibility, not just about looking after our own safety but other people’s safety.”

Ms Spencer-Henshall side-stepped the political row that blew up on Monday over new government guidelines relating to Kirklees but said she was grateful for clarification that the borough is not facing a new local lockdown.

She said: “The public health advice that we have followed for the last 18 months is still the right advice irrespective of what variant we are dealing with.

“If everybody can do what is second nature to them – hands, face, space, meeting outdoors, great ventilation if you are indoors – then we should all be able to move through the roadmap in a safe way and hopefully re-open Kirklees.”

The council is running three testing units, all open 10am-4pm, at:

TV show winner wants to raise £100,000 for orphanage by running a marathon during Ramadan