'We will help Yorkshire to "clean slate" and promote diversity, inclusivity'

Clean Slate Films and Clean Slate, an India-based entertainment streaming business that has female empowerment as its motto, on Sunday 1 May, broke new grounds to unveil its name on the main pavilion of Yorkshire County Cricket Club’s Headingly Cricket Ground. 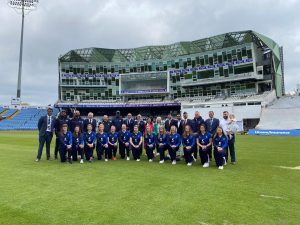 Clean Slate, a company founded by Karnesh Ssharma, brother of actor Anushka Sharma, wife of former India captain Virat Kohli, and Amreesh A Chandra, in April became the first Indian business to land a sponsorship deal with a major sports venue in the UK. The India-based company is in the process of launching what it claims is “the world’s only female-forward, female-first original-content OTT streaming platform”.

The Indian sponsor revealed a series of new initiatives as part of their Principal Partnership deal with Yorkshire County Cricket Club (YCCC). This includes funding free cricket kits for young female cricketers to inspire them to step into the game.

The announcements were made during the official unveiling of the Clean Slate branding on the East Stand and main pavilion, now known as the Clean Slate Pavilion, at Headingley Cricket Ground by

Guest of Honour Tracey Brabin, Mayor of West Yorkshire said: “I am happy to welcome Clean Slate as Principal Partner across Yorkshire Cricket County Club and the women’s team Northern Diamonds, and hope this is the start of a long relationship between Clean Slate and the region.

“Following the successful visit by the High Commission of India to West Yorkshire last month, I want to foster even stronger international links between our incredible cultural and creative businesses and India. I hope Clean Slate is the first of many Indian businesses that see the value in partnering with organisations in our region.

“Sport, culture, and the creative sector can be a great force for promoting inclusivity. Clean Slate’s focus on putting women and diversity centre stage aligns with my goals as Mayor to make sure cultural activity for all is at the heart of our recovery and ongoing growth.”

During the press gathering Clean Slate also announced plans to explore a partnership between the Clean Slate Foundation and the Yorkshire Cricket Foundation, with the prospect of building a community enterprise based in the county to be known as Clean House. The purpose of Clean House will be to jointly promote, build, and invest in the community through film, arts, sports, and education.  Further details and plans for this are set to be explored during a roundtable meeting today between Clean Slate, Mayor of West Yorkshire, West Yorkshire Combined Authority and Leeds City Region Enterprise Partnership (the LEP).

As an Indian-based entertainment streaming business with female empowerment at the heart of its purpose, Clean Slate has a stated mission for equality. The partnership with YCCC, Northern Diamonds and subsequent sponsor deals with the stadium sees the opportunity for Headingley to drive inclusivity, diversity, and engagement through cricket, both as a sporting venue and heart of a sporting community.

Lord Patel, Chairman of Yorkshire County Cricket Club believes this is positive step for the club and Yorkshire. He said: “Unveiling the branding at Headingley marks the official commencement of this exciting partnership between YCCC and Clean Slate. We are so proud to be working alongside a vibrant Indian brand that knows how to entertain diverse communities and one which mirrors our vision for the future of Yorkshire.

“The women’s game is such a vital component of an inclusive environment and is at the heart of our proud club’s future. Clean Slate’s financial support is a key enabler of its progress and also sends a message to young aspiring female cricketers that their participation is incredibly valued. As this relationship develops, it will bring further opportunities to our community, as Yorkshire aims to become a beacon for inclusivity, diversity, and acceptance.

Speaking on the announcements Clean Slate Filmz and Clean Slate Studioz Founder Karnesh Ssharma adds: “Supporting the Northern Diamonds was a key pillar of our Principal Partnership with YCCC and the county of Yorkshire in particular. Through our support, we have a vision to present more opportunities for young women and girls who dream of gracing the cricket field against the backdrop values of inclusivity, equality, and diversity.

“Clean Slate traditionally uses entertainment as a vehicle for empowering women in the film industry, but our mission transcends all forms of culture. We are passionate about inspiring more girls to feel they can pursue a journey in sport without any form of prejudice or financial barriers.

“Clean House will build and invest in the community through film, arts, sports and education – all of which are integral facets for the inclusive integration of members of society.”.

Amreesh A. Chandra, Co-Founder of Clean Slate Studioz, believes the launch of Clean House comes at the perfect time for the county and further empowers the relationship between India and the UK.

“Yorkshire is a cosmopolitan county where diversity is celebrated. The values of Clean Slate are strongly aligned with those of YCCC and of course the wider community, which is why we felt so inspired to launch Clean House to form a physical hub and beacon of empowerment for the people of Yorkshire.

“Our partnership with YCCC is a reaffirmation of the valued relationship between the UK and India and is being implemented right on the heels of Prime Minister Boris Johnson’s recent visit to India.

As the governments of both India and the UK are at the cusp of signing a historic trade deal, we are confident the partnership between Clean Slate and YCCC will open the floodgates for further cooperation for social, business, and cultural collaboration between the countries.”

Row breaks out over “diminished” scrutiny of council