Bradford’s very own professional boxer Tasif Khan returned to the boxing ring in Germany following a two-year hiatus due to the pandemic. The super fly weight world champion, boxed out in Germany on 30 October and made his fans, family and Bradford proud by winning his fight against Columbian champion, veteran and former WBO world title challenger Ronald Ramos.

Tasif won with a TKO in the third round at Huckelshoven in Germany.

The fight began as a technical chess match, with both fighters trying to outsmart each other and outthink the other.

Tasif displayed great composure as he began to put on the pressure and throw more combos, with particular detail to body shots. Halfway through the second round Tasif caught Ramos with a beautiful combination against the ropes and finishing with a left hook to the body, which brought Ramos sinking to his knees. In the gripping round, Ramos took the count but bounced back up in rage banging his gloves together showing the referee his fit to continue.

The fight continued, Tasif moved forward and pressed once again with thought and calculated pressure and this time was met with Ramos in the centre of the ring. Ramos gave everything he had and was refusing to give ground, but it wasn’t long for Tasif to fire home another sinking body shot just before the end of the second round causing another knockdown and count for Ramos

Ramos gasping for air and slightly unsteady on his legs took the count and made his way back to the corner.

The end seemed near and Tasif was now growing more in confidence and warning to the task ahead. 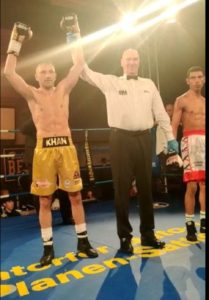 combos to the head and body. Ramos tried using his experience and boxing ability to keep the distance, however in the process he got caught again with fast darting combos this time finishing with a beautiful uppercut to the head.

Ramos hit the canvas for the third time in the fight and just looked in pain and discomfort, which eventually led the referee wave the fight off in favour of Tasif Khan.

On his victory Tasif thanked his supporters, his team Monarch Promotions and sponsors Insane Air.

He also went on to dedicate his win to his late father.

“I’d like to dedicate this fight to my late father, Haji Agha Khan who I lost to Covid19 this time last year (Dec 2020). I truly hope I have continued to make him proud and wish he was here now to give me his celebratory hug, after my win.” Said Tasif

Now that the boxer has ‘shaken off the ring rust’ Tasif hopes to be back in the ring before the end of this year and has vowed to make Bradford, England and Pakistan proud with his victories.

We at Asian Standard wish him all the best

Children across the Bradford district celebrate the Queen’s Platinum Jubilee