The Battle of Lancashire vs Yorkshire | Amir Khan vs Kell Brook set to fight next year!

Sports wouldn’t be sports without rivalries which make them entertaining to watch. Whether it’s in football between Manchester United and Liverpool or in cricket between Pakistan and India.

One thing for sure is, boxing has its fair share of rivalries and one which has brewed for many years is the one between Amir ‘King’ Khan (34-5-0) and Kell ‘The Special One’ Brook (39-3-0).

The fight was confirmed last night, and Sky Sports shared the news on their social media accounts. After years of anticipation, both foes will enter the squared circle on February nineteenth in Amir’s native city of Manchester.

After months of negotiating whether the fight would take place in the United Arab Emirates or USA, the final decision was made to allow the fight to take place at the MEN Arena in Manchester.

Both fighters were expected to fight many years ago but after negotiations failed from either side they did not meet in the ring. As a result, Amir and Kell went their separate ways to build their careers and fight other opponents.

Amir took the initiative in his early years of boxing after losing in a shocking manner to Breidis Prescot to travel abroad to the United States and compete with top-level fighters and with the best of trainers the US had to offer.

Upon his arrival in the states, Amir decided to train by Freddie Roach, the hall of fame trainer who worked alongside the former eight division champion, Manny Pacquiao. With Freddie Roach on his side, Amir looked unstoppable after claiming a world title.

Fans know and all agree that Amir was one of the greatest welterweight fighters in his prime. Kell Brook on the other hand never went abroad until recently and decided to stay within Yorkshire and train at Ingle Gym in Sheffield. However, Brook did go onto beating Shawn Porter to becoming the IBF world champion when he fought in the states.

Now, after many years on after Amir’s recent win against Billy Dib, and Brooks loss to the current WBO champion, Terrence Crawford, Amir and Brook are ready to squash their beef once and for all in the ring. 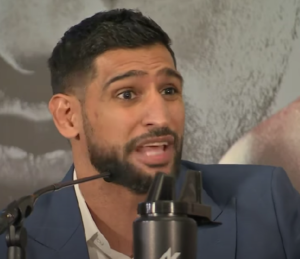 Amir started the press conference by saying he had come “levels below” to fight Kell as he believes his resume alone shows the type of fighter he is.

Kell on the other hand stated Amir was “dilutional” in thinking he was better. The war of the words continued until Amir explained how he was chosen for the Olympic team because he would always defeat Kell in their sparring sessions earlier on in their careers.

Amir explained, “The reason I got chosen and Kell will agree is because I was the better fighter. He knows it himself. Why was I chosen to represent England in the Olympic games? It’s because I was the better fighter, and the coaches knew it. Even the coaches said go easy on him”. Kell was furious hearing this and shouted back, “He’s a liar, he knows that’s not true. He’s just making it all up”.

In the end, the faceoff between the two almost ended in blows as Kell started pushing Amir’s head back which caused the security team to interfere and break the two up. 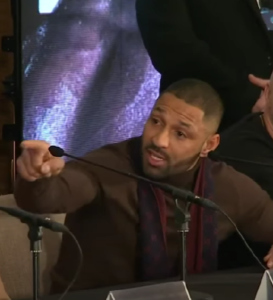 Although fans might believe the fight has come quite later than previously anticipated, it’s clear the bad blood between the two is real and fans are still eager to see who turns out on top.

The press conference was just the beginning but there’s still upcoming media obligations which means both will come eye-to-eye relatively soon. It seems clear that either of the two will stay calm amongst each other until they step in the ring and fight for bragging rights.

What are your predictions for the fight? Does Amir Khan win by KO or does Kell finish the fight in the earlier rounds?

Let us know your predictions below in the comments.

Row breaks out over “diminished” scrutiny of council